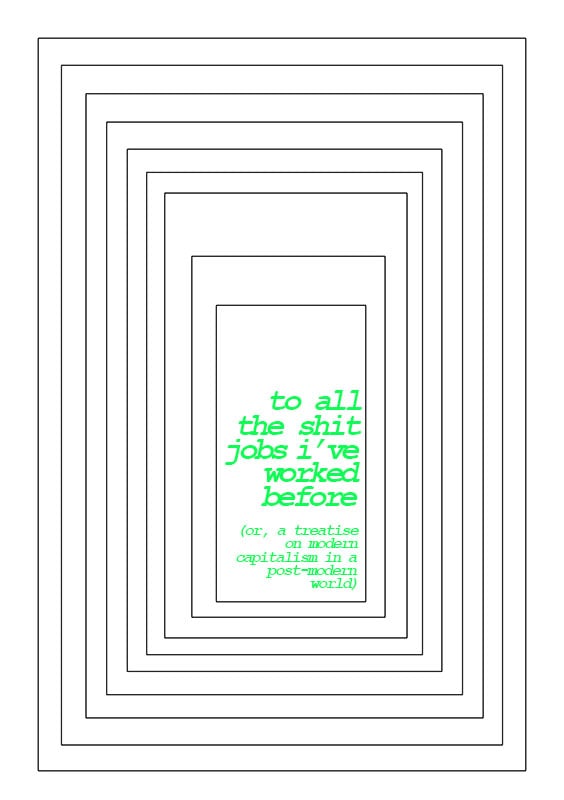 To All The Shit Jobs I've Worked Before

Unfortunately, the title is no hyperbole. In the form of what can only be called "experimental memoir", Cher charts her 17-year trajectory of shit jobs (and counting): from McDonald's and university fine art classes in so-called cosmopolitan Singapore, to an amateur league AFL oval in suburban Adelaide, these snippets serve as a glimpse into what a globalised, non-tertiary educated working-class misfit has to do to survive.

Equal parts LOL-inducing and tragic, it shines a light on something often unconsidered in our society of binaries: shit-kicking isn't as anti-intellectual as it appears. As labour becomes ever more casualised in late-capitalism, this zine invites readers to think broadly on the invisible peripheries when discussing social class and the factors that drive it.

What does it mean when class boundaries collapse in our ostensibly democratic yet terribly obfuscated current realities?

A5, 20pages, photocopied, cut-and-paste
Please allow a week to ship.

"Harsh but pretty on point." - her boyfriend

"Wait... why doesn't Cher have a Verso book deal already?" - her Proper Writer friend who refuses to have their identity disclosed

"Like if Jorge Borges was in a long-term triad with Megan Boyle and Tao Lin." - me

0
Your bag is empty
Start shopping